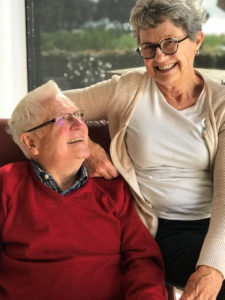 Marion and Terry Mikkelsen, Louise’s parents, have provided wonderful support for Sweet Louise since it was started 15 years ago.

“Louise was a feisty and determined child. She was also very loving and kind. She was our fourth child so had to battle to make herself heard in the family!” says Marion. “That stood her in good stead later on in life.”

“It was really difficult for us both when we learned Louise’s cancer was metastatic. Terry was away in Dallas when he found out. And around the same time our daughter Gillian’s baby died. He had to pull over on the motorway and cry. We just wondered what else could go wrong.”

“Yet Louise continued to fill her life with positive experiences and lead her life to the full. She worked as a lawyer after being diagnosed and taught law. She absolutely loved teaching the kids. She even completed her Art History degree just a few months before she died.”

“Louise’s husband Scott was a big influence. He was always there supporting Louise and they were a great pair. And of course, it was Scott who decided to do something in Louise’s name to help other New Zealanders facing incurable breast cancer, which led to the creation of Sweet Louise.”

“I think Louise would be absolutely astonished by how many women Sweet Louise supports. She had big ideas, but she was also very humble.”

“We think Sweet Louise is wonderful. I still volunteer and take women to meetings when I can. And when I can’t drive then Terry fills in.”

“Louise was so well loved, and it is fantastic that so many of her friends and family continue to support Sweet Louise.”

“Sweet Louise gives a great service in the nicest possible way to so many women.”